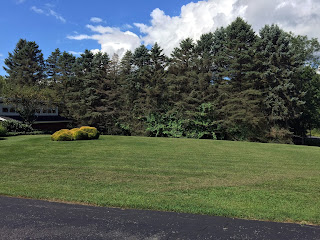 The trees on the west side of the house had been there since the house was built in 1969.  They had reached heights of more than 30 feet. 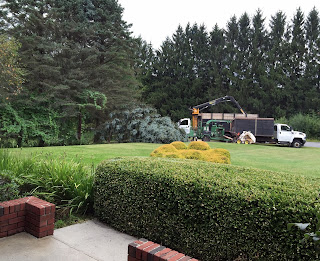 Many of them were blue spruce with good tops but diseased and damaged lower limbs.

Here the first tree is felled and its limbs are being "treated" to a trip through the heavy-duty chipper. 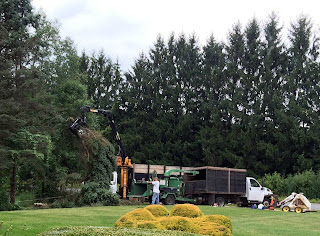 The trees were taken down one by one.  Several had the studio on one side and an electrified horse pasture fence six feet away on the other. 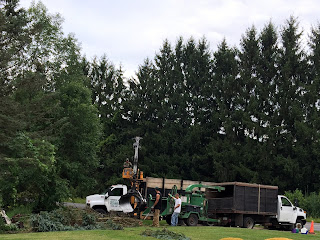 The men spent a fair amount of time discussing where to drop each cut.  The owner did most of the close-in work and seemed very confident and skilled. 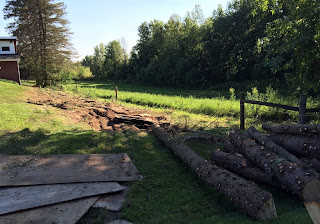 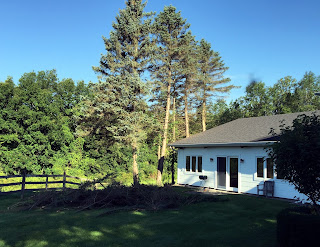 The view from the road looking toward the studio demonstrates the close quarters as a challenge at this point in the job. 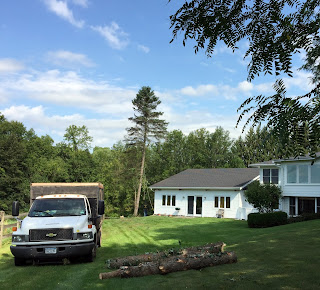 Another view of the remaining challenge as seen from the back of the studio.  The horse fence changes to post and rail here and drifts closer to the path of falling trees.  We did not watch this part of the job! 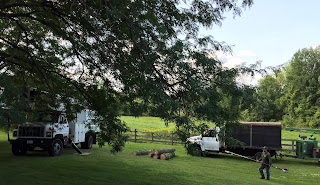 All went well.  This company has rough lumber for sale, and they harvested many of the pine logs all along the row. 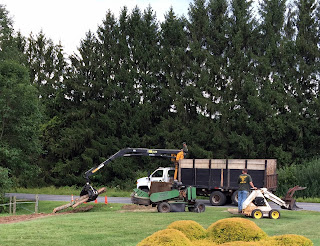 They had one more pine tree to remove by the barn, and then they moved to the task of trimming up the big marine locust in the back yard.

They were careful to clean up all the debris, including raking up any chips and small sticks.


They had a large claw on a boom located on one of the trucks.  It had extension capability and was able to lift heavy loads.

We were pleased with this company and would share contact information if you have need for tree trimming or removal.