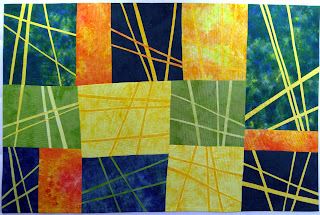 I'm pleased to announce that Jet Trails #5 has been accepted into the SAQA (Studio Art Quilt Associates) exhibit, Structures in Cloth, which will be seen at three venues in Colorado.

The exhibit will open in June at the Arvada Center for the Arts and Humanities in Arvada.  Then it will travel to the Sangre de Cristo Arts Center in Pueblo, and then to the Fort Collins Museum of Art in Fort Collins, finishing in April 2012.

The jurors for the exhibit are Sandra Sider and Bebe Alexander.
Posted by Marcia at 8:26 PM